It’s been the better part of a month since we last ventured into space on this blog, but only two days since we saw some classic denialism. Today, we get both! Brian Thomas’ Wednesday article is called Certain Stellar Features Just Don’t Exist. Can you guess which he is talking about?

Sorting fact from fiction when it comes to outer space can be tricky, especially when scientists assert that certain stellar features are real when they are not. Why should school textbook authors, or the students and teachers that rely on them to deliver accurate information, trust these scientists’ more speculative assertions when they routinely name structures that don’t exist?

Recently, the European Space Agency reported about a distant, dust-shrouded star that some astronomers believe looks like what our solar system might have looked like before it supposedly formed itself. An ESA press release said that “sites of active star formation” are called “pre-stellar cores.” But in reality, although scientists have witnessed star deaths, no modern astronomer has recorded a single star’s birth.

Yes, we have seen many supernovae over the centuries. These events can serve as a discrete marker for the “deaths” of those stars that go through this phase in their evolution. But there is no such easily-observable event in the formation of stars that could let an astronomer look up from their telescope and announce, “yes, I’ve seen a star form.” It’s a process that takes thousands if not millions of years to complete, and we have not been observing for nearly that long. What we have got is examples of stars from all stages in their evolution – the press release cited here, for example, announces the discovery of a cloud presently undergoing collapse:

The observations also revealed that the water molecules are flowing towards the heart of the cloud where a new star will probably form, indicating that gravitational collapse has just started.

“There is absolutely no sign of stars in this dark cloud today, but by looking at the water molecules, we can see evidence of motion inside the region that can be understood as collapse of the whole cloud towards the centre,” says Dr Caselli.

What else do you want, Brian?

Assuming that stars form naturally ignores the scientific evidence of their recent, supernatural creation. That assumption follows logically from the given premise of naturalism, but it does not reflect the science.

Observations confirm that gas clouds expand; they do not appear to collapse into stars.

The ESA discovery makes a nice counterexample to this. 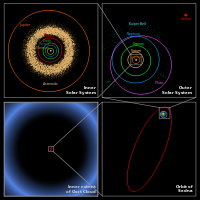 That’s it for the stars themselves. Next up are ye olde comets:

An online video posted on LiveScience featured a variety of space scientists, including NASA’s Donald Yeomans. He confidently referred to “the Kuiper Belt” and the “so-called Oort cloud, which is a spherical distribution of comets surrounding the sun,” as though they were real, observable entities. An artist’s illustration accompanied his description. However, just as astronomers have never seen a star form, they’ve never seen the Oort cloud.

Being so far from the sun the Oort cloud is quite dark – detecting their presence directly would not be easy. We have a hard enough time finding Kuiper belt objects, and we know that exists.

The reason why young Earth creationists like to deny the existence of both the Kuiper belt and Oort cloud is that together they mess up the YEC’s primary comet-based PRATT. We know full well that comets like Haley’s Comet cannot last for ever, and wont have been orbiting in the same orbit since the formation of the solar system – at some point the loss of mass from solar approaches becomes total. The creationist claim here is obvious, but is destroyed by the existence of the Kuiper belt and Oort cloud which act to replenish the supply.

We see comets coming from the outer reaches of the solar system on a regular basis. Many of these objects have orbital periods longer than the Ussher chronology allows for the age of the universe, which should raise some interesting theological questions for young Earth creationists. 90377 Sedna (a probable dwarf planet, not a comet) will make its closest approach to the sun in the mid 2070’s, but will not be back for another twelve thousand years. But what about the many other rocks that should be in different phases of their orbits, too far away for us to observe? I wonder what the creationist position is on them…

Anyway, you can find more information on comets and creationism in this podcast episode. Thomas caps that section off with the following;

In response to these assertions, ICR astrophysicist Jason Lisle said, “Some other star systems have evidence of disks of material, which astronomers are calling Kuiper belts. But these are disk-shaped, whereas an Oort cloud is supposed to be spherical. There is still no observational evidence of an Oort cloud.”

I’m not sure if Lisle is correct here – in fact, this old ICR radio show has one of their members conceding (~5:20) that “what look like” Oort clouds have been seen around other stars.

These scientists fail to make basic observations. What about their more esoteric ideas?

Princeton University reported on an imaginative scenario whereby life may have arrived on earth through unseen past “planetary fragments cast forth by disruptions such as volcanic eruptions and collisions with other matter.” And just like “pre-stellar cores” and the “Oort Cloud,” secular scientists solidified their unscientific idea by providing it a fancy name—lithopanspermia.

Panspermia isn’t a particularly well accepted idea for how life could arrive on Earth. Lithopanspermia involves meteorites arriving from other star systems where life has already developed. One common objection to this idea is that the rocks would be travelling far too fast to be captured. The article cited claims that this is not actually a problem.

If outer space investigators assert celestial entities that actual science has either failed to confirm or has virtually disproven, then should the public honestly be expected to buy into their wild fancies about living cells surviving volcanic ejections from imaginary proto-planets or violent outer space collisions of imaginary meteorite-like space rocks?

He’s really ranting here. Where does he even get the “violent outer space collisions” part from? I couldn’t tell you.

In related news, you should have heard by now of the discovery of Alpha Centauri Bb, the first planet discovered in the Alpha Centauri trinary system. What you might not know is that the existence of planets in the system was predicted back in 2008, against what would seem to be the problems of planet formation in binary systems. While we haven’t yet found the “goldilocks planet” the paper most notably predicts as, like the Oort cloud, we simply don’t have the technology, I think we can chalk this up as a win for planetary formation models. God didn’t have to create planets there, after all.

4 thoughts on “The So-Called Oort Cloud”