In late 2013, as a response to an article by Brian Thomas rounding up what he considered the ICR’s greatest hits of the year, I wrote a post consisting of historical quotes altered to support each creationist claim Thomas brought up. For example – pertaining to the usual comet trope – Confucius almost certainly never said:

Heaven, in the production of things, is sure to be bountiful to them, according to their qualities. Hence the comet that is flourishing must be replaced often, as the bulbs don’t last like they used to.

Hardly the pinnacle of comedy, I know, but I never claimed to be any good. I mention this old post not to revisit past failures but to bring attention to the underlying point of this bastardisation of Marcus Aurelius:

He who has seen present things has seen all, both everything which has taken place from all eternity and everything which will be for time without end; for all things decay predictably and exponentially (except isotopes).

Anyone who has been reading creationist arguments for very long has probably noticed this for themselves: while YECs vehemently deny that radioactive isotopes decay in a predictable and inalterable fashion that could be used to accurately determine the passage of time, they themselves often contend that other processes decay in the same way. Humphreys’ ideas about planetary magnetic fields might be the example that most commonly appears here, but today Brian Thomas provides us with a new one. He writes, in “Did Adam Really Live 930 Years?“:

Genesis 5:5 says Adam lived for 930 years. Judging by today’s standards, this sounds impossible. Many contemporary readers of Genesis balk at such numbers and some end up rejecting the whole Bible. But a few researchers have found reasons to believe it.

Plant geneticist Dr. John Sanford and his colleagues plotted the ages of the biblical patriarchs listed in Genesis. The result shows a systematic drop-off in lifespans after 950-year-old Noah, “in a way that could never happen by chance,” according to an online post showing their results.

Thomas doesn’t really say anything that’s not in that article, which is titled “Genetic Entropy Recorded in the Bible?” and located at the website of a creationist joint called Logos Research Associates. Betteridge’s law of headlines tells us that in both cases the answer is “no,” but let’s investigate why we might come to that conclusion.

John Sanford is known for his contention that “genetic entropy” – the build up of mutations over the generations – is driving humanity extinct and therefore evolution is going the “wrong way” and is impossible. He, along with Jim Pamplin and Christopher Rupe, seek support in the ages of the biblical patriarchs which can be observed to decline substantially as Genesis progresses – Adam outlives Abraham several times over, for example.

Using the Masoretic text they have constructed a table of the Patriarchs, their age when they had their first son, and their age of death, along with biblical references. Appended to the bottom of this list are king David, credited as living 70 years, and a figure for the average life expectency of people in the Roman empire who lived to at least ten years old (45) that is cribbed from Wikipedia. Unfortunately whatever they are using to display tables doesn’t allow easy copying into a spreadsheet for analysis, so I’ve copied out the important numbers into google docs if anyone wants to follow along.

The first thing they do is graph the first nine patriarchs – Adam to Noah, minus Enoch who was raptured prematurely and doesn’t count – producing a figure like the following:

1: X-axis is generations/patriarchs, Y-axis is lifespan in years

(I’ve reproduced these graphs myself in LibreOffice.) As you can appreciate for yourself there really isn’t much in the way of a change here, a fact which conflicts with the logic behind genetic entropy, which is supposed to begin with the Fall. They wave this away, speculating that “This may suggest a very low mutation rate during this period.” They concentrate their analysis on the period from Noah onwards, which behaves much better:

Careful observation – or just reading ahead – will reveal that four people included in the table and the original scatterplot at the Logos Research Associates website were excluded from the actual calculation of the trendline. The caption to the graph explains:

This is quite strange, as it is perfectly possible to do the same analysis with these points included, producing a fairly similar result: 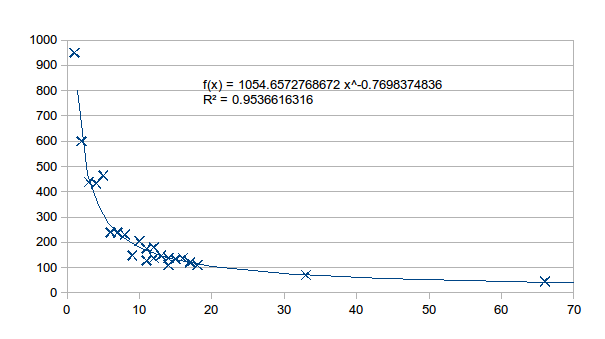 3: The above graph, but with Sarah, Ishmael, Levi, and Aaron included.

The only damage is a very small knock to the calculated R² value – the percentage of the variation explained by the formula – which raises questions about how exactly they “confound the calculation.” If you’re counting, this makes the second case of massaging the data (after excluding the first few patriarchs) to fit the claim, though it is quite minor and indeed unnecessary.

Skipping ahead, they say:

The shape of the downward slope should be immediately recognized by any biologist. It is a biological decay curve. Noah’s descendants were undergoing some type of rapid degenerative process.

Later on they call it an “exponential decay curve,” rather than “biological.” Now I can’t speak for biologists, who are after all sometimes stereotyped as having got into the field to avoid doing maths, but I’d hope that any mathematician could point out to you that this isn’t an exponential decay curve – it’s a power law.

That sounds like a trivial distinction, but it’s important here. Sanford is looking for a decay curve to match his hypothesis, but it’s not at all clear why or how that mechanism would produce a graph of this shape. My guess is that they calculated the best exponential curve… 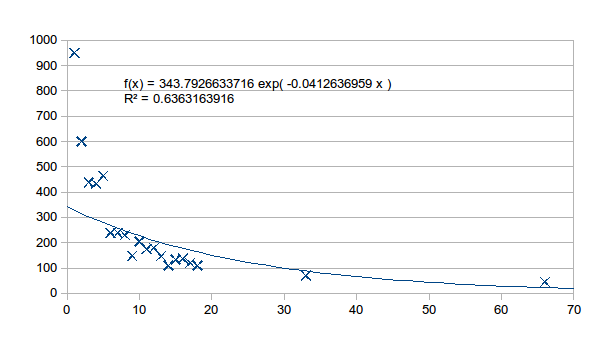 4: An exponential curve plotted to graph 2

…and discovered that it didn’t fit nearly as well as they hoped, and went searching for one that worked better. The power law they hit upon does slope downwards, and has a curve to it evocative of exponential decay, but not all graphs are created equal.

On this theme we also have the question of why the Masoretic text was used instead of the Septuagint or Samaritan alternatives. They claim that it doesn’t really matter, but this isn’t quite true. Wikipedia provides a comparison of the genealogies and ages in each, at least for the first few patriarchs, and so the following graph compares the Masoretic text and the Septuagint:

5: The Masoretic text (orange) vs the Septuagint (blue) for Noah to Abraham. Note the difference in R² values

The difference isn’t crippling, and is also exaggerated in this less well-behaved portion of the decline, but when coupled with other criticisms isn’t insignificant either. They defend their choice in two ways:

Referring again to Wikipedia we find this assertion to be patently untrue, and that after Noah – the period of interest – it is the Masoretic text that is the odd one out. For more on this point see this discussion.

Lastly, our analysis supports the Masoretic text in terms of our statistical analysis. When we plotted longevity based upon the Masoretic versus the Septuagint text, we saw that the Coefficient of Determination was higher for the Masoretic data (.96), than the Septuagint data (.93). (The Samaritan text only includes the first five books of the Bible, and its missing lifespan data prevents its inclusion in this comparison).

The problem with this is that the Coefficient of Determination (i.e. R²) value is the thing that they are trying to calculate in the first place: this is blatant cherry-picking of the translation that best fits the result they are looking for.

It may seem surprising at first that the lifespans of the patriarchs fit so perfectly a mathematical function, but when we consider that to do so they must pick the translation, datapoints, and graph that gives the most favourable answer – rather than this being predicted from what they already know – this becomes much less impressive. Logos Research Associates inc. claims to “faithfully hold to the scientific method and the need for scientific integrity,” but this is not their finest hour.

Sanford and colleagues propose two explanations for their findings. On the one hand, the bible is literally true and shows the degeneration of life, and on the other it’s all “fabricated by a sophisticated and scheming single author” to make it look like life is degenerating. No prizes for guessing which they favour.

There are a few large problems with this. Sanford assumes that either he’s right, or things were fabricated to make it look like he’s right, but fails to consider the possibility that the ancients may have had a different purpose for their writings and perspective on them. This is a common flaw to creationism, but no small one. Another thing he missed is that all numerical sequences made up by humans are going to have mathematical underpinnings. That he can come along thousands of years later and find a graph that fits them – provided the correct translation is used etc – is no great wonder. The best that Sanford can claim to have predicted in advance is “the numbers go downwards,” which isn’t much.

To bring this all back, young-Earth creationists need to remove the log in their eye before they criticise the speck they see in isotope dating. They may just find that it is a hallucination brought on by pressure on the frontal lobe.

3 thoughts on “Confounding the Patriarchs”