Thomas has conceded the point – “Thanks for catching my errors!” – and this article has vanished, to be replaced by one on Mercury. A screenshot of the original is available here. 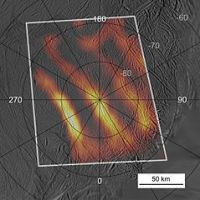 Today’s DpSU – Saturn Moon’s Space Geyser Should Not Exist – is an example, among other things, of Brian Thomas taking a minor detail from a science news article (here, Enceladus Plume is a New Kind of Plasma Laboratory) and running off on a creationism-related tangent. His entire argument consists of these two paragraphs:

Enceladus loses “about 200 pounds of water vapor per second,” which roughly equates to three tons per year. Enceladus weighs over 100 quadrillion tons and supposedly formed billions of years ago. The plume provides an opportunity to cross-check its old-age assignment.

Assuming that the small Saturnian satellite has always issued the same amount of material at the same rate as it does today, then it would have completely unspooled itself in about 35 million years. Why is it still so active?

About 200 pounds (about 100 kilograms) of water vapor per second – about as much as an active comet – spray out from long cracks in the south polar region known as “tiger stripes.”

Now, I have three important problems with Thomas’ claim:

Back to the drawing-board, methinks. I’ve let them know about the error – as it is inarguable and ruins the article completely it will be interesting to see what they do.