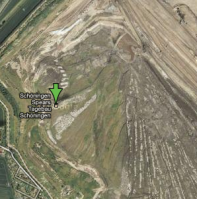 There seems to be an interesting side effect of the distaste that young Earth creationists seem to have for “historical science”: they’re no good at it. Believe it or not, there are some events in history that the Bible says absolutely nothing about, and creationists seem to be unable to build a coherent picture from the available evidence. Take this latest Brian Thomas article, Eight Spears found in German Coal Mine, as an example.

First, though, there are a few things that need to be noted. The obvious conclusion that would be drawn from such a title in a young Earth creationist publication is that the story is of the “petrified hammer” variety. Not so. I can’t get explicit confirmation from anything I’ve read, but it seems that while it’s literally true to say that the Schöningen Spears were indeed ‘found in a German coal mine‘ they weren’t actually in the lignite being extracted. Instead the spears themselves are dated to ~300,000 years ago, and are believed to have been wielded by Homo heidelbergensis.

Researchers discovered eight well-manufactured throwing spears in an Ice Age coal deposit near Schöningen, Germany. They are calling these the oldest human tools. What can forensic science reveal about the people who made them?

As I said I don’t think the spears were actually found in the deposit, but it’s a fairly moot point as that aspect isn’t relevant to the rest of the article.

Who’s “calling these the oldest human tools”? I’m struggling to find anyone but Brian doing so – they’re calling the spears the oldest hunting weapons, which is quite a difference. We have much older tools, most of which are just rocks that have been chipped a bit. Indeed, calling a find the ‘oldest tool’ is more about defining how far back you can still call its maker human than about the tool itself. To be human do you have to be Homo sapiens? In that case these spears probably aren’t made by true humans at all. But if “human” includes all of the genus Homo then the opposite is true – but then there are far older tools made by Homo erectus that predate the spears. It’s not easy to slice this in such a way that the oldest weapons are also the oldest tools, highly appropriate though that may be.

Portions of the Schöningen open pit coal mine were set aside for archaeological work decades ago. In 1997, Hartmut Thieme of the Lower Saxony State Office for Heritage described three spears that he found in the Helmstedt lignite coal mine. They were constructed to such exacting specifications that replicas of them performed as well as modern javelins in throwing tests.

Yes, the spears are more than a decade out of the ground. At the time they apparently revolutionised what we thought about our ancestors from this period, turning them from Arctic scavengers into master hunters of the tundra. There doesn’t seem to be a good reason why this subject should be brought up now of all times, as while Brian cites a recent news release on the spears it’s not tied to any new event (so far as I can tell). Thieme’s original 1997 paper is here, if you want to take a look. I can’t read past the abstract which is why I don’t have much information on the geology.

The site also contained fossils of fruit, other vegetation, birds, fish, and thousands of mammal bones representing rhinoceros, elephant, cows, red deer, many smaller mammals, and mostly horses—including many horse bones with cut marks from butchery. Such an assemblage of various animals and human remains clearly indicate that a severe Ice Age storm washed them into a low-lying area and quickly covered them with mud. Indeed, it had all been submerged for centuries until engineers drained the area to expose and mine its coal.

This is the story that Mr Thomas has concocted to explain the observed archaeology. He adds a footnote:

Conversely, Wikipedia claims that the sediments were deposited in a littoral zone – the edge of a lake, in other words. The layers – again, I’m fairly certain they’re not coal themselves – are repeated because of silting up and changes in lake levels. I get the impression that if the layers were instead the result of something catastrophic like Brian says then he would have some evidence for it, and wouldn’t have to gloss over his assertions with a ‘clearly.’

Remember, there are a couple of hundred bones in your body, and similar numbers in other animals. Something like ten thousand bones have been found – not individual animals, bones. If a particular hunting site was a repeat destination over a period of thousands of years, then this assemblage would not be out of the question even with fairly low levels of activity. No catastrophes required – certainly not again and again.

Archaeologists from the University of Tubingen found eight additional spears from the Schöningen coal mine. They appear to have been mass produced. Like javelins, their center of gravity was balanced toward the front of each spear. The news release said, “The spears and other artifacts as well as animal remains found at the site demonstrate that their users were highly skilled craftsmen and hunters, well adapted to their environment—with a capacity for abstract thought and complex planning comparable to our own.”

The additional spears corroborate the significance of the 1997 spears, which had rewritten evolutionary notions of early Europeans as brute scavengers, not “highly skilled craftsmen.” Archaeology magazine reported, “They suggest that early man was able to hunt, and was not just a scavenger.”

I don’t think eight new spears have been found, merely that there were originally three and since then they have become eight. Another largely irrelevant point. It’s amusing that they would be called ‘mass produced,’ – I get the impression that the actual meaning behind that phrase has been lost somewhat.

The earliest direct or indirect evidence of tools shows every indication of human-like expertise in manufacture. For example, people butchered animals in Africa long before these German spears were used. Ancients ground grain and decorated baskets. And the earliest religious temple was of the highest quality, currently under excavation in Turkey.

The first reference is to this 2010 DpSU, about some scratches on bones that were attributed to tool use and dating to about 3.4 million years ago. Brian probably shouldn’t have said that they were from “long before” the spears, as he later says in a footnote:

Although evolutionists overestimated the ages of these artifacts due to uniformitarian assumptions, these spears could probably be some of the earliest human artifacts. Since they were found in coal deposits associated with the Ice Age, and since people required some time to migrate from Babylon to modern Germany, this places these artifacts relatively soon after the Flood, which is roughly dated to 2,500 B.C. by standard Bible chronology.  For example, see Sewell, C. 1995. Biblical Chronologies Compared. Bible & Spade. 8 (1): 20-31.

There really isn’t any time to slip the markings in – though I’m not sure how he gets from “it took a while to get to Germany” to “it was really soon after the flood.”

The grain story is in reference to another 2010 article mentioning the discovery of “grain grinding tools made of stone” dating to “up to 100,000 years.” Finally, the “earliest religious temple” is Göbekli Tepe, which we saw in January. I don’t know why Brian said it was “of the highest quality.” I doubt that it was, at least on a scale of one to Solomon, but I do know that it was pagan (playing fast an loose with definitions there, I know). 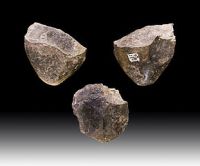 If human evolution were true, one would expect to find that the earliest ape-like humans produced clumsy efforts, not the refined tools and artifacts known around the world. Therefore, it comes as no surprise to Bible believers that early human artifacts such as well-formed throwing spears show that ancient humans were fully human.

But the oldest tools are pretty clumsy efforts, at least in comparison to these spears. Take the Oldowan tools above – barely more than rocks. They are the true “early human artefacts” – javelins appear quite late on the scene, just as you would expect. Brian’s alternative explanation? Not so much.

2 thoughts on “The Schöningen Spears”