Most likely inspired by the recent “Ant’s use TCP” story, the That’s a Fact video for this month is called Ant Engineer. Its blurb reads:

Ants can ruin picnics and cause all kinds of trouble. But these little creatures have amazing attributes that scientists are now learning from. 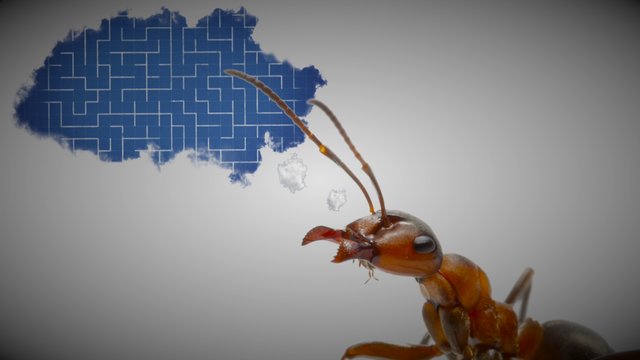 Having your picnic ruined by an invasion of ants is no fun, and neither is stepping on a fire ant hill.

I’ve never had that happen to me – the alleged “picnic invasions” are merely pro-wasp propaganda. They’re the true culprits.

But these little creatures are programmed with amazing attributes that scientists are now learning from.

The video gives three examples of how this is so:

Ants are orderly. Researchers found that ant colonies operate using mathematical algorithms similar to what we use in internet data management. This helps ants to avoid traffic jams and food storage problems, like overstocking.

This was the “Anternet” story I already mentioned. The distilled point was that ants are capable of using the rate of return of foraging ants to influence their decision over whether they should themselves leave. It would be fairly simple “programming.”

Ants are smart. Scientists have discovered an amazing puzzle-solving ability in ants. In one study, ants were placed in a maze which has traditionally stumped many people. Once the ants solved the puzzle, they communicated its solution to others in the colony.

The video doesn’t give any sources to allow the investigation of its claims, as usual. Here’s a youtube video of an ant doing a very simple maze (at least to we who can see all of it):

I think the ICR is overselling the ability of a single ant. I whole colony I could understand – you can best think of a colony as a single organism – but one ant on its own is actually pretty dumb.

Ants are team players. In another study, information overload was evident when individual ants attempted to choose a nest site. But groups of ants easily handled the task, and made better decisions.

Not sure why the queen ant was sent out to find a colony, but yes, ants are better in groups.

Of course, ants don’t go to school to learn these behaviours, so how did they become so capable? From an all-knowing, all-powerful Creator, who programmed these keen abilities into the ant, as he did with every other living creature on Earth.

And we’re done – that was quick.

The reason why I go on about how ants are only “smart” when they work together is that they are a prime example of emergence, the thing which Randy Guliuzza thought didn’t exist. On an individual level ants follow comparatively simple rules, but en masse more complex patterns emerge that allow them to find the fastest route to food and forage more effectively etc. You simply do not need an “all-knowing, all-powerful Creator” to replicate the underlying logic, in fact you shouldn’t need a designer at all. Emergence isn’t something that’s hard to evolve – evolution is a form of emergence.