From the ICR’s URCall series of videos, hosted by Markus Lloyd. “Why spiral galaxies are young”—for real this time. (link)

Did you know that spiral galaxies could not exist if the universe was billions of years old? Their centre rotates faster than their arms. If these were billions of years old they would have blended into disk-shaped galaxies by now, and their spiral arms would have been twisted beyond recognition. So how old is our universe? Creation science has an answer that might surprise you.

This argument rests on a bait-and-switch: END_OF_DOCUMENT_TOKEN_TO_BE_REPLACED

Note: my exams should be almost over by this point, and this makes the 9th out of 30 URCall videos that we’ve looked at. What do you make of these posts, as far as filler goes?

From the ICR’s URCall series of videos, hosted by Markus Lloyd. “Are comets evidence for a young Earth?” (link)

Did you know that comets are evidence for a young Earth? With each orbit around the Sun comets lose mass. If the solar system is really billions of years old these comets should no-longer exist. So how do you explain that?

This is an extremely short episode from URCall – so short, in fact, that they don’t actually manage to fit their argument in. END_OF_DOCUMENT_TOKEN_TO_BE_REPLACED

Blue stars burn so brightly that they consume their fuel much faster than other stars. The hottest blue stars last only a few million years, and no astronomer has ever observed a new blue star forming. So, if astronomers are still seeing blue stars – which should have burned out a long time ago – how can the universe be billions of years old?

END_OF_DOCUMENT_TOKEN_TO_BE_REPLACED

It’s no-longer Friday anywhere – indeed, it’s a Sunday afternoon in these parts – but I need to clear some browser tabs. As such we have a somewhat wider pool to draw from.

END_OF_DOCUMENT_TOKEN_TO_BE_REPLACED

It’s that time of year again: time for Brian Thomas to recycle the news stories of the year in a rapid-fire format. First up are the astronomy topics.

If the moon was formed over four billion years ago by some colossal impact as secularists assert, then it should be dry as a bone. The violent impact would have melted all the minerals and thus would have ejected any water from its magma. But this year researchers reported discovering water within the minerals of some moon rocks. Not only does this refute the molten moon narrative, but it supports Scripture’s recent and watery lunar origins.

The Moon is mildly damp: see this post for more details. To quote the apostle Peter:

For this they willfully forget: that by the word of God the heavens were transformed from water, but a little bit was left behind because He wasn’t paying much attention. And when He saw this He left it there, because it would screw with people when they saw it.

END_OF_DOCUMENT_TOKEN_TO_BE_REPLACED 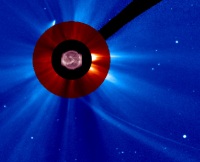 Or not, as the case may be. If you haven’t already heard Comet ISON – once hailed as a potential “comet of the century” – has almost certainly fragmented after rounding the Sun and will not be spectacularly gracing our skies over the new year, nor returning to the outer reaches of the solar system intact. In more hopeful times back in late June Brian Thomas published an article called “Ison–The Comet of the Century,” which opened:

In September 2012, a Russian and a Belarusian astronomer using the Kislovodsk Observatory co-discovered a comet heading our way. Comet Ison should become visible to Earth viewers in December 2013 after passing perilously close to the Sun during November. It may even appear brighter than the moon, triggering discussions about when and how comets formed.

Thomas, who paid no attention to what was even then a very real possibility that ISON would break up during its “perilous” perihelion approach, used the comet as a launching pad to promote the young-Earth creationist view that comets prove that the universe is young. But even before fragmenting ISON was not a particularly good poster-boy for this cause. END_OF_DOCUMENT_TOKEN_TO_BE_REPLACED

We have a new contender for the title of “oldest known galaxy”: it has a redshift of z = 7.51, corresponding to an age only 700 million years younger than the universe as a whole, and has been assigned the code z8_GND_5296. Discoveries like this happen fairly often, as there is a sustained effort of astronomers staring at little red dots with similarly arcane designations in the hope of teasing out a little more information about the early evolution of galaxies. END_OF_DOCUMENT_TOKEN_TO_BE_REPLACED

How did the moon form? Nobody quite knows with absolute certainty. The creationists think they know – Goddidit – and they think that any other attempt at the answer is baloney. Hence Moday’s article from Brian Thomas, Impact Theory of Moon’s Origin Fails, which opens:

Secular scientists used to regard the planetary collision theory as a triumph in explaining several of the moon’s specific arrangements. But newfound facts severely debilitate this lunar impact origins theory.

According to this new theory, an early Earth collided at a glancing angle with a planet that was one or two times the mass of Mars. Some of the debris launched into orbit around Earth and somehow collected to form the moon. This could explain the moon’s peculiar orbit and some of its other properties. But, as Bob Jones University astronomy professor Ron Samec noted, recent studies refute even this origins scenario.

Primarily we’re talking here about the “[giant] impact hypothesis” – which is not “new,” being first proposed in 1975 – but Thomas quickly veers off into older, more obviously false theories. END_OF_DOCUMENT_TOKEN_TO_BE_REPLACED

The Moon, as we are increasingly discovering, is slightly damp – much more so than we thought 40 years ago, when we were “there” (as Mr Ham might say). Of course, anything is greater than nothing, but how it got there remains an open question if only for the moment. A conference abstract presented at the recent European Planetary Science Congress gave the results of a study on some lunar rocks – namely troctolite 76535, described elsewhere as “without doubt the most interesting sample returned from the Moon,” and norite 78235, which they actually found to be more useful – that they say supports the notion that there was water in the original material that first formed the Moon.

Brian Thomas’ article is called Water in Rocks May Support Moon’s Bible Origins. He seems to have recently run out of unused titles that involve absolute statements: His article on Monday on the planthopper “gears” only went so far as to say that they “might have evolutionists hopping mad,” whereas I expected him to cry that they completely and utterly proved beyond a shadow of doubt that the Earth is 6000 years old and created by the Christian God worshipped by American fundamentalists, in line with his usual hyperbole. Regardless, his uncertain headlines match for once his weak position on both issues. END_OF_DOCUMENT_TOKEN_TO_BE_REPLACED

Jake Hebert is also the author of today’s article, Do New Measurements Confirm Big Bang Predictions? The subject is a NASA press release about the 6th and final release of WMAP (Wilkinson Microwave Anisotropy Probe) data, which opens:

The WMAP science team has determined, to a high degree of accuracy and precision, not only the age of the universe, but also the density of atoms; the density of all other non-atomic matter; the epoch when the first stars started to shine; the “lumpiness” of the universe, and how that “lumpiness” depends on scale size. In short, when used alone (with no other measurements), WMAP observations have improved knowledge of these six numbers by a total factor of 68,000, thereby converting cosmology from a field of wild speculation to a precision science.