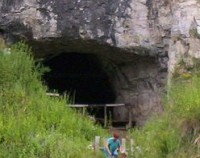 The Denisova hominins were a group of humans that, similar to the more famous Neanderthals, survived until just a few tens of thousands of years ago. Their discovery was announced only in 2010, in the form of a portion of a child’s little finger extracted from the Denisova cave in Siberia. Since then it has been determined that a tooth found in 2000 was from the same group. Curiously, given the finds location in Russia, the Denisovans are believed to have interbred with the ancestors of people that now live in the vicinity of Melanesia.

We can tell all this from such scant evidence because conditions in the cave allowed the aforementioned finger bone to preserve the complete genome of its owner. Most recently this has been sequenced with as much fidelity as you would get from an analysis of a living person. Brian Thomas writes: Is Fossil Finger Genome Human?

The Denisovans are similar enough to modern humans that creationists must include them on our side of their rather arbitrary human-ape division. They have inherited the “fully human” epithet of the Neanderthals. For example:

First, Neandertals were fully human and interbred with modern man. Second, this Denisovan DNA only differed from Neandertal by a “small number of genetic changes,” indicating a close relation.

For those that don’t remember, Jeff Tomkins recently revealed his complete ignorance of how the evidence for said interbreeding actually works. Thank goodness that post never did make it to the ICR’s website, or there would have been quite a contradiction on the books.

Let’s skip ahead to the quote-mining:

Denisovans and Neandertals clearly appear to have been varieties of human. But when did they live? Science reported “very rough dates of 30,000 to more than 50,000 years for the layers of sediment where the fossils of Denisovans, Neandertals, and of modern humans were all found.” But when geneticists dated the Denisovan using DNA mutation rates—rates that are routinely calibrated to the assigned age of fossil remains—they estimated that it could have been deposited around 80,000 years ago. Reich told NPR, “So we have a date in the paper, and it’s embarrassingly uncertain.” He said that the uncertainty is due to ignorance of the mutation rate.

Consider Reich’s quote (erroneously credited to cite #4, one of Thomas’ articles from 2010). From context it would appear that he’s talking about the 80,000 date. The implication is that the 80,000 is “embarrassingly” shaky. But looking at the NPR transcript we find that this is not what he said:

FLATOW: So how far back would you have to go to find our common ancestor with the Denisovans?

REICH: So we have a date in the paper, and it’s embarrassingly uncertain. So the date that we quote for the common ancestor of modern humans and Denisovans is between 170 and 700 thousand years.

FLATOW: That’s a wide – you could drive the proverbial archaeology truck through that one.

REICH: That’s right. It’s really embarrassing. Now, genetic dates are just embarrassing in general, and one of the big uncertainties about genetic dates is that they’re based on using a molecular clock, kind of like a carbon-dating clock that counts like emissions of particles, but here’s it’s emissions of new mutations.

But we don’t know the rate of those emissions, the human mutation rate, and that’s so uncertain that a lot of that broad range is due to just not knowing what the human mutation rate. Hopefully, that will clear up in the next few years, and we’ll have a better estimate of important dates, like the time we split from Denisovans and Neanderthals.

(Thomas’ quote bolded.) So he wasn’t talking there about the age of the fossil at all, but the ‘last common ancestor’ date. The uncertainty is inherent in the “between 170 and 700 thousand years,” but there is no way that this can be shoehorned into the 6000-year time frame of biblical literalism (and, as I mentioned last week, this has been tried – Thomas actually cites that paper in this article).

That transcript also provides an interesting counterpoint to the Denisovans are closely related to Neanderthals:

Returning to the 80,000 and other numbers given by Thomas, even despite his deception it wouldn’t be true to say that these are themselves precise. He cites the paper – A High-Coverage Genome Sequence from an Archaic Denisovan Individual, Science (pdf). A summary also published in Science (pdf) says:

The team also counted the differences between Denisovans and chimps, and found that they have fewer differences than do modern people and chimps. The girl’s lineage had less time to accumulate mutations, and the “missing evolution” suggests she died about 80,000 years ago, although the date is a “best estimate” and, therefore, tentative, says coauthor David Reich, a population geneticist at Harvard University. If this date—the ﬁrst proof that a fossil can be directly dated from its genome—holds up, it is considerably older than the very rough dates of 30,000 to more than 50,000 years for the layer of sediment where the fossils of Denisovans, Neandertals, and modern humans all were found. “It’s great that you can start to put a genetic date on the fossil, because we don’t have any decent absolute dates for these fossils,” says paleoanthropologist Chris Stringer of the Natural History Museum in London.

(It would appear that this was the true source for Thomas’ quote (bolded).) So all of those dates are rough, though it’s clear that they’re all still more than 6000 years ago. The paper itself says, for a little more precision:

When comparing the number of substitutions inferred to have occurred between the human-chimpanzee ancestor and the Denisovan and present-day human genomes, the number for the Denisovan genome is 1.16% lower (1.13–1.27%) (Fig. 2) (8). This presumably reflects the age of the Denisovan bone, which had less time to accumulate changes than present-day humans. Assuming 6.5 million years of sequence divergence between humans and chimpanzees, the shortening of the Denisovan branch allows the bone to be tentatively dated  to between 74,000 and 82,000 years before present, in general agreement with the archaeological dates (2). However, we caution that multiple sources of error may affect this estimate (8). For example, the numbers of substitutions inferred to have occurred to the present-day human sequences vary by up to one-fifth of the reduction estimated for the Denisovan bone. Nevertheless, the results suggest that in the future it will be possible to determine dates of fossils based on genome sequences

Since the archaeological date is “very rough,” and the molecular clock date is “embarrassingly uncertain,” and since the two are in discord, perhaps none of those estimates are accurate.

As I said, that last line cites Wood’s Journal of Creation Theology and Science paper Ancient mtDNA Implies a Nonconstant Molecular Clock in the Human Holobaramin. Adding a delicious touch of irony, that paper points out that “Denisovan sequences are diagnosably different from modern humans” – not quite where Thomas was going.

The high-resolution sequencing of ancient DNA is a technological achievement that certainly does enable researchers to better characterize these “Ancient Relatives: The Denisovans.” They were relatives, and they were ancient, but not nearly as ancient as claimed.

He has no evidence for this beyond the fact that the current calculated are so imprecise – he can’t even make the claim that the uncertainties point towards younger ages than older ones!

All in all, a poor showing.