Gah, some real writers block on this one. Sometimes I get halfway through a post and I know what I want to say, but I can’t wrestle it into my usual style. It tends to happen when the topic is generally fairly boring, yet at the same time intensely interesting to me personally in a way that I can’t show to anyone else. I want to go down all kinds of rabbit holes, but this isn’t terrible conducive to producing a coherent and informative blog post. So I’ve stopped writing and opened a text document, and I’m going to try give you a tour of the more interesting bits.

First: the Brian Thomas article is “Clever Clover: Evidence for Evolution?“; the paper is “Adaptive gains through repeated gene loss: parallel evolution of cyanogenesis polymorphisms in the genus Trifolium (Fabaceae),” (press release, pdf). Some clover plants produce cyanide, some don’t, the pattern isn’t what you might expect – you see both forms in the same species, and the versions that lack cyanide (having it is the default) seem to have evolved independently via the same pattern of gene deletion. You get the idea, I hope. END_OF_DOCUMENT_TOKEN_TO_BE_REPLACED

A paper from way back in February, called The Majority of Animal Genes Are Required for Wild-Type Fitness (pdf), opened with the following:

Almost all eukaryotic genes are conserved, suggesting that they have essential functions.

What this jargon-filled sentence means is that “almost all” genes in animals/plants/fungi/protists exist in other animals/plants/fungi/protists (and sometimes even in bacteria), and have thus not been lost or otherwise discarded, which suggests that they are probably fairly useful. It’s worth realising here and now that this logic is based on the unspoken premise of evolution, which in sane-people land is a fairly safe assumption for research purposes. If creationism were true, on the other hand, there would be no basis upon which to draw such a conclusion. END_OF_DOCUMENT_TOKEN_TO_BE_REPLACED

More than a month ago now Jeffrey Tomkins published a DpSU on the ICR’s website called Study Shows Proteins Cannot Evolve. He also posted it on his own blog, Designed DNA, a couple of days later as he often does. Because it appeared the last day before exams I didn’t have much time to write anything more than a recommendation that you compare Tomkins’ article with a blogpost by fellow young Earth creationist Todd Wood on the same subject.

I recently wrote an article discussing a recent research paper that showed how proteins contain non-negotiable sectors that are intolerant of amino acid changes and that when the other protein sectors that may tolerate such changes are altered, the changes often reduce quality of protein function. The 3-dimensional structure that proteins fold into, is also affected by the sequence of amino acids.

END_OF_DOCUMENT_TOKEN_TO_BE_REPLACED

There are only a handful of articles left in the November 2012 edition of Acts & Facts that are worth close inspection. One of these, oddly enough, is by the prolific Brian Thomas. Most of Thomas’ Acts & Facts articles seem to be repeats of stuff that we have already covered, but his November article – Human Mutation Clock Confirms Creation – is a rare exception in that it seems to be largely new. END_OF_DOCUMENT_TOKEN_TO_BE_REPLACED

I sometimes regret tethering this blog so tightly to the activities of the ICR – it means it’s harder for me to talk about what I want (not that I’m very good at that). After all, moments of hilarity and craziness are by no means limited to this one organisation. And science itself is cool too, I suppose. Anyway, here are some vaguely-relevant things I have read recently: END_OF_DOCUMENT_TOKEN_TO_BE_REPLACED

You’ve heard of Richard Lenski’s long-term E. coli experiment before, I assume. It’s widely cited as a counterexample to a subset of creationist claims, and is particularly famous for Andrew Schlafly’s hillarious attempt to challenge Lenski’s findings in 2008. RationalWiki summarises what you should already know:

On June 9, 2008, the New Scientist published an article describing preliminary results of a long-running experiment started by Lenski [ED: link]. Lenski and his team had taken a single strain of the bacterium E. coli, separated its descendants into twelve populations, and proceeded to observe their mutations over the course of twenty years (a process discussed on Lenski’s website). The E. coli were fed a measured amount of glucose every day. At one point, one of the populations exploded far beyond the parameters of the experiment. Lenski eventually discovered that this population had evolved the ability to “eat” citrate, an organic molecule which was part of the solution the E. coli lived in, but which E. coli cannot normally digest. Thus, evolution had been visibly observed, with an exquisite amount of evidence establishing the timeline along the way. Not only that, but the experiment was repeatable; Lenski started new experiments with the frozen “archives” of the population which exploded, and found that beyond a certain point, that particular population of E. coli were highly likely to evolve the ability to digest citrate. The paper also highlighted the role of historical contingency in evolution and the role of potentiating mutations.

There is an additional, less commonly known but still important fact to note: your average E. coli can already metabolise citrate, just not in the presence of oxygen. Indeed, not doing so is a defining characteristic of the species* – does this experiment then qualify as the creation of a new “kind” of organism, I wonder?

Anyway, that’s what we already knew. While the appearance of citrate metabolism was well-documented, with huge quantities of data to wade through only now (with a new paper in Nature) do we have an insight into the changes at the genetic level that allowed the phenotypic changes be observed. Perhaps in a desire to become the next Schlafly, Brian Thomas writes Bacterial ‘Evolution’ Is Actually Design in Action. END_OF_DOCUMENT_TOKEN_TO_BE_REPLACED

Back in late July I missed – by virtue of being on a school trip for a class I don’t actually take – two articles in a row by Jeff Tomkins. For completeness’ sake, here you go: END_OF_DOCUMENT_TOKEN_TO_BE_REPLACED

In a previous career, Brian Thomas was once a high-school biology teacher. I believe I’ve already expressed my horror at that.

His latest article – Single Mutation Makes Melanesians Blond – doesn’t help. There are, at my count, at least two HS biology concepts that the article suggests he is completely ignorant of. Let’s go look: END_OF_DOCUMENT_TOKEN_TO_BE_REPLACED

There was no DpSU for Wednesday from the Institute for Creation Research. Instead, on there home page is a Days of Praise article called Giving Thanks for Christian Friends. From this I take it that they’re taking the time off to celebrate Thanksgiving, a holiday with all the hallmarks of a pagan Harvest Festival without actually being pagan. From what I remember they did something like this for July 4, Columbus day and Halloween as well, although in the latter case they were condemning the event and warning their followers not to take part.

As there is nothing recent in the queue this, then, is the perfect opportunity to go back and cover the DpSU I missed from last Tuesday, DNA Study Contradicts Human/Chimp Common Ancestry. That’s quite a claim – let’s see what he’s got.

END_OF_DOCUMENT_TOKEN_TO_BE_REPLACED

This would have been great for studying purposes for the Biology exam this afternoon. Not because there were any dogs in it (or Gods for that matter), but some of the general concepts are quite applicable to the questions in the Describe genetic variation and change paper. Once the creationism is removed, of course – I live in a civilised country, you know…

Anyway, the article title is How Did Wolves Become Dogs? I wonder… 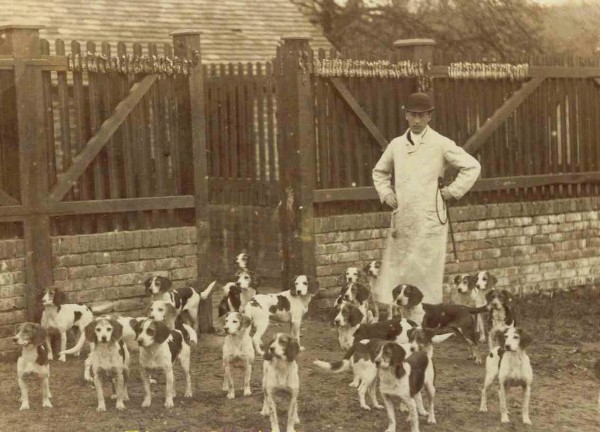