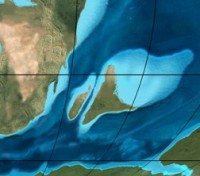 Claims of new “lost microcontinents” – often associated in the media with Atlantis – seem to be everywhere lately. For instance we have the recent Brazilian discovery of potentially continental rocks in the Atlantic ocean. Today ICR geologist Timothy L. Clarey has a beef with “Mauritia,” an Indian Ocean microcontinent under what is now Mauritius whose existence was proposed back in Febuary – he writes Outlandish Claims for Missing ‘Continent’.

A group of European scientists have announced the “discovery” of a small continent in the middle of the Indian Ocean that doesn’t exist on any known map. What is this proclamation based on? It’s based on the age estimates of some beach sand and a belief that the “absolute dates” the researchers determined are reliable and factual.

Clarey is not fond of this claim at all. END_OF_DOCUMENT_TOKEN_TO_BE_REPLACED