We return once more to “soft tissues” (and other organic molecules) with Brian Thomas’ new article, Bloody Mosquito Fossil Supports Recent Creation. You’ve probably heard of this already: a fossil mosquito, found in an oil shale deposit (and not amber, as you might have expected), appears to contain blood. Or something like that, anyway. Thomas opens his article:

Already, we have a problem. We’re not talking about “blood” here, but “remnants” thereof. This is a key difference: the soft tissue argument put most simply is the claim that various organic molecules and/or structures found in fossils would have turned to dust if they really were as old as claimed (so therefore they are much younger). You cannot very well make this argument if what you are pointing to is the selfsame dust that you claim should be there if the fossils were old. The key issue then is what is actually in this fossil, and we should avoid being distracted by how long we think liquid, cell-containing red blood could last.

Publishing in the Proceedings of the National Academy of Sciences (PNAS), the researchers reported that they detected iron three times inside the fossil mosquito’s abdomen, which strongly suggests the presence of still-fresh hemoglobin. They also confirmed the presence of heme groups (vitamin-like porphyrin molecules found in hemoglobin) only inside the abdomen, where living female mosquitos store the blood from their meals. The study authors wrote, “The combination of these two determinations indicates that the porphyrins are derived from the oxygen-carrying heme moiety of hemoglobin.”

The paper, if you want to read it for yourself, can be found here (or here if you have a subscription). The age of the fossil is 46 million years, and it was found in the Kishenehn Formation in Montana.

The primary goal of the paper is to prove the existence of blood-sucking mosquitoes in the distant past via a more direct method than simply noting that a particular fossil looks quite similar to a living species that does so. They actually have two fossils: one is presumed to be a male, as its abdomen is not distended in the way that their second, presumably female, mosquito is. They say that a total of 36 mosquito fossils have been found in the formation, which is apparently becoming quite a good place to find insect fossils.

The first line of evidence is that the female abdomen was tested in three places (hence Mr Thomas’ reference to “three times,” which you might otherwise take for meaning three times something) and discovered to contain iron. This is fairly good evidence that the mosquito had eaten blood in and of itself – blood contains lots of iron, while insects use other methods to transport oxygen – but iron is not known for its transience (being an element, and a stable one at that) so this is hardly evidence of young age.

The second line of evidence is the presence of what they call “heme-derived porphyrins.” These are organic molecules at least, but that doesn’t necessarily mean they could not have been preserved. They should also not be confused with the preservation of haemoglobin itself. 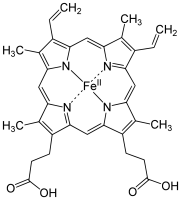 The first of those two images is haemoglobin: the coloured spirals are chains of amino acids, while the small green molecules are heme. The second image is a digram of heme b itself. As I’m sure you can appreciate, the preservation of heme is one thing, while the preservation of an entire molecule of haemoglobin is quite another. And it is heme that they say has been preserved – well, sort of.

If you look at the supporting information (and you can – it’s free and not particularly dense) you’ll see on the third page pictures of “plausible structures” of what they detected. They’re not actually claiming heme itself – hence, heme-derived porphyrins – but instead molecules that appear to be heme with a few modifications. One of the menagerie, for example, takes the structure above and removes two COOH groups, one CH₂ and one CH₃ group. Others have lost even more groups.

The big question is whether these are molecules that we should expect to have turned to dust, or are they themselves the dust we were expecting? That’s not something we can answer at the moment, but Thomas still insists the former:

No scientific evidence supports the assertion that heme groups can last, even under circumstances that would maximize their preservation, for one million, let alone tens of millions of years. In fact, all longevity studies of biomolecules like hemoglobin, DNA, and collagen show decay rates in ranges that show total sample disintegration in a matter of months to a maximum of several hundred thousand years—assuming reasonable Earth surface temperatures.

His citation says no such thing (at least, about haemoglobin, and certainly not heme derivatives) – which is funny, because it’s to his own paper, published this year in Proceedings of the Seventh International Conference on Creationism. Despite providing no relevant numbers, it does say this:

The current status of soft tissue fossil research offers several cautions to creationary attempts to interpret and communicate them. First is the often opaque or absent chemical identification offered in many paleontology reports. For example, the popular phrase, “remarkable preservation” most often does not refer to original biochemistry, but to such details as whole-body outlines or mineralized tracings of organs or other body parts.

Second, fossil biochemicals are more often than not altered by mineralization and in particular keratinization, and cannot therefore be considered to be original. A problem for creationary interpretation is that many secular study authors do not report detailed fossil chemistry. Instead, molecular characterization often takes a back seat to phylogenetic comparisons. But unless chemical analyses are performed, for example by sequencing, tissue-specific staining, immunological reactivity, synchrotron X-ray, or GC mass spectrometry, to verify original tissues, then claims of “soft tissue preservation” cannot be reliably inferred to indicate a contrast to deep time age assignments.

Last, the longevity of certain biomolecules is either unknown or poorly characterized. In particular, hemoglobin, chitins, melanins and keratins are reported in fossil dinosaur and mosasaur, insect and lobster, dinosaur skin and squid ink, bird feathers and reptile skin, respectively. But without more intimate knowledge of their decay rates, care must be taken to avoid overstating its case for creation. At best, characterization of these fossil molecules from Mesozoic or Paleozoic strata are considered unexpected by uniformitarians. However, their attempts at explaining the data from their perspective should not be ignored because they might advance our understanding of what could or could not lengthen molecular longevity. In any case, young-world arguments offered from original tissue fossil finds should be limited to those finds that characterize biochemicals with known decay rates. Reporting other molecular finds should be appropriately cautious and accompanied by reasonable caveats.

Highlighted above are not points that are necessarily relevant to this case, but are things that I have pointed out again and again when examining Thomas’ “creationary interpretations” of news events. It’s nice to know that he recognises these problems, but he’s not following his own advice. In this article, for example, he is neither reporting on a find of “biochemicals with known decay rates,” nor is his article “accompanied by reasonable caveats.” Instead, he is citing articles to back up claims that they do not even touch on, same as always.

Moving along, Mr Thomas has another point to make. The mosquito fossils were found in oil shale, which contains the potential precursors to oil, coal and gas. Thomas tries to argue that these too, being of organic origin, must not be able to survive millions of years either. This is actually him taking a leaf out of Tim Clarey’s book – as Ashley Haworth-Roberts noted in the comments a couple of days ago, he published an article in the most recent edition of Acts & Facts on this subject, contending that bacteria would eat it in that time. I have to say that I doubt this option, on the grounds that while bacteria on the surface may be quite able to eat oil, in a saturated rock deep underground with little available oxygen they may not have the same luck.

But even if bacteria were “excluded,” Mr Thomas wants to know why the oil would not have turned to carbon dioxide:

Authors of a 1987 study wrote, “Average total organic carbon contents…in the Kishenehn Formation exceed 6%,” meaning that over six percent of the material in the formation has organically-derived carbon. Unaltered, original plant molecules were found in the oil. “Specific molecular markers are present in these samples, including several suites of diagenetic [partly altered by burial and age] steroidal hydrocarbons. Land-plant molecular input [e.g., chlorophyll] suggests nearshore deposition for the southernmost samples,” according to the same study.

Even if bacteria were somehow excluded from this oil, it would still have fizzled into smaller inorganic forms like carbon dioxide long before 46 million years elapsed. But both the presence of blood and oil give evidence of a recent creation.

For oil to turn to CO₂ it must combust – whether all at once or molecule by molecule, it’s still the same reaction. As we all know, fire requires three things: fuel (here, oil), an oxidant (almost always oxygen, so far as we’re concerned) and a source of ignition. As a layer of oil-bearing rock is unlikely to blow up all at once, we’re more interested in the rare occasion when a molecule of oxygen collides with a molecule of oil at a speed great enough to be over the “activation energy” of the reaction. Considering how rare oxygen itself would be, this isn’t going to happen very often yet will need to occur for each and every molecule until none are left. This may take some time, if it even happens at all – before insisting that the process should have finished in just 46 million years Mr Thomas needs first to figure out what the rate actually is. Meanwhile the well documented processes that naturally turn organic material into linear hydrocarbons like that found in oil and natural gas have no such hurdles.

Returning to the first paragraph quoted there, Thomas implies that more complex – and “unaltered” – biomolecules are present, “e.g., chlorophyll.” He points to a conference abstract from 1987 which says no such thing – those are his words, not theirs. A paper from the same year by one of the abstract authors investigating the “steroidal hydrocarbons” concludes that the formation is presently undergoing the process of diagenesis, not that some change that should have occurred has not.

TL;DR: You cannot reasonably ask pointedly why certain molecules have not decayed in the time that they have existed if you have no idea better than a gut feeling as to how long they should take to break down, or even that they would. Brian Thomas knows full well that this is an issue, but he’s not letting it stop him.

Once again I’m thinking of changing the theme of this site to better aid readability (I seem to do this every year or so). Don’t be surprised if it looks different next time you’re here, and feel free to offer suggestions and complaints.

5 thoughts on “Not Quite Jurassic Park”