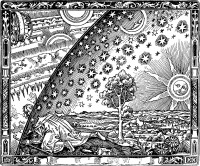 Your Origins Matter returned from it’s holiday break a more than a week ago now, and it’s about time that I took a look.

The first post was about the end of the world, and wasn’t very interesting. The second – Have you been feeling hot or cold lately? – is much more so. It first challenges a piece of climate research on the grounds that it is based on “millions of years,” before breaking out some of the standard tropes (with a creationist bent):

Within recorded history (not over millions of years), the earth has experienced periods of warming and cooling. The most dramatic such period was a single, protracted Ice Age following the global flood of Noah’s day, as described in Genesis.

Although there was only one true Ice Age, there have been other warming and cooling periods within recorded history.  A period of minimal solar activity between 1645 and 1715 A.D., known as the Maunder Minimum, may have helped contribute to the severity of European Winters during the coldest part of what is called the “Little Ice Age” (about 1350-1850).  The “Little Ice Age” was preceded by a warmer interval called the Medieval Warm Period.

The post concludes asking “Should climate change concern us?” There are three lengthy responses. The first opens “Yes, we should be worried about climate change!!!!,” the second with “I am not concerned with climate change at all.” The third first says “yes,” but then decides to reject the science on the basis of the faint young sun paradox of all justifications.

The next post is called On the First Day, and deals with a “discrepancy” in Genesis 1:

The opening chapter of the Bible begins, “In the beginning God created the heaven and the earth” (Genesis 1:1). God’s first act of creation was the universe: time (beginning), space (the heavens) and matter/energy (the earth). Initially, all was engulfed in darkness until God said, “Let there be light” (Genesis 1:3).

One of the traditional “discrepancies” attributed by the skeptics to the Genesis account of creation is the fact that there was “light” (Hebrew: or) on the first day of creation week, whereas God did not create the “lights” (Hebrew: ma-or) to rule the day and the night until the fourth day.

A similar argument that I have seen more often is the question of how you can have ‘days’ before the heavens were properly set up, used by some to argue that Genesis 1’s chronology should not – could not – be taken literally.

YOM’s response to their version is a classic tu quoque:

However, it is interesting that modern evolutionary cosmologists find no problem in having light before the sun. According to their speculative reconstruction of cosmic history, light energy was produced in the imaginary “Big Bang” 13.75 billion years ago, whereas the sun “evolved” only five billion years ago.

Science, however, actually explains where this light came from – in the case of the CMB it was even predicted before it was observed. It gets better:

Thus, even in their attempts to destroy the divine revelation of Genesis, they inadvertently find it necessary to return to its concepts. Light energy somehow had to be “prepared” before the sun and other stars could ever be set up to serve as future generators of light energy. The fact that light is an entity independent of the sun and other heavenly bodies is one of the remarkable scientific insights of the Bible. As the basic form of energy (even intrinsic in the very nature of matter, as expressed in the famous Einstein equation), it is significant that the first recorded word spoken by the Creator was: “Let there be light” (Genesis 1:3).

“The fact that light is an entity independent of the sun” should be perfectly obvious from the phenomenon known as ‘fire.’ Interestingly, Genesis 1:16 – “And God made two great lights; the greater light to rule the day, and the lesser light to rule the night: he made the stars also.” – appears to suggest a misconception over whether or not the moon produces it’s own light (it doesn’t, but is here given near-equal status with the Sun). The stuff about light being the “basic form of energy” is just hilarious – it sounds new-agey, even.

There are seven comments on this post, discussing various aspects, but none are easily summerisible.

The most recent post is On the Second Day (this seems to be a series). It defends the firmament as meaning expanse, and not something solid:

The English word “firmament” in the Bible is a translation of the Hebrew, rāqia, meaning “expanse.” Its meaning is not “firm boundary” as Biblical critics have alleged, but might be better paraphrased as “stretched-out thinness” or simply “space.”  This firmament obviously could not be a solid boundary above the sky, but is essentially the atmosphere, the “first heaven,” the “space” where the birds were to “fly above the earth in the open firmament of heaven” (Genesis 1:20).

Here’s a rebuttal piece to that idea, if you’re interested.

The post then goes on to discuss the water canopy idea, concluding:

Dogmatism with regard to the canopy is ill-advised, but the basic model is sound and fits with scientific data. The Christian faith is a reasonable faith, for when the Bible can be tested, it has proved itself reliable.

In conclusion, the ICR still doesn’t like climate change, they think that the issue of light before the sun is a non-starter, and they like the water canopy but aren’t prepared to accept it as dogma. The Genesis 1 series looks interesting though – it’s weekly, so come back next Tuesday.