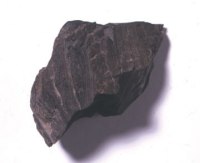 For his November geology article John Morris gave a report on the Devonian Chattanooga Shale, which he called an “evolutionary enigma.” According to Morris the “evolutionary” explanations for its formation are all wrong, and the Flood did it.

The most common sedimentary rock type is known as shale, made up of tiny silt or clay particles cemented together. Tiny particles are easily carried along by moving water. Thus, in uniformitarian thinking, shale particles take an inordinate amount of time to fall through a column of water and settle on the bottom, even when the water is completely calm.

To the extent that this is true (it probably is, but I’m no geologist), the conditions under which the sediment that becomes shale falls to the bottom of the water column will be based less on “uniformitarian thinking” so much as the laws of physics and our knowledge of fluid dynamics. Morris never does explain how shale could be laid down in the tumultuous conditions of the Flood, though he assures us they do indeed exhibit evidence of “catastrophic deposition.”

Some shales are black in color, loaded with organic material. The classic North American example of black shale is the Chattanooga Shale; evolutionary scientists traditionally thought that it was deposited in deep, stagnant ocean water. But that may be too simple, because other evolutionists acknowledge the problem of the “Chattanooga Black Shale Enigma.”

Morris cites this claimed ‘acknowledgement’ to a geology textbook called Evolution of the Earth. More specifically it seems to be the name of a subsection header in chapter 12, but I don’t know what was written within and Morris does not detail what the book actually says about the matter.

Morris’ article is poorly cited, making it difficult to work out the background to what he’s talking about. From what I have been able to uncover it seems that there has been, at least in the past, some controversy over how the Chattanooga and related shales formed. According to one source:

Common misconceptions about these shales are that they represent distal deposits that accumulated in deep waters of stratified anoxic basins, and that they form a largely continuous, though condensed, succession. We have shown that these shales contain numerous discontinuities, and represent at least in part shallow water deposition. Truly anoxic conditions must have been exceedingly rare occurences.

So the depiction of the “evolutionary” (he needs to stop abusing that word) ideas for the formation of the shale that Morris puts forward dows not accurately reflect what is currently believed by scientists. According to Morris he sees things like this:

Flood geology places essentially all strata during the great Flood of Noah’s day—a depositional situation that is quite different from deep and stagnant water. Seldom more than 20 feet thick, the Chattanooga Shale is underlain by an amazingly flat, featureless erosional surface, with no significant high or low areas where deposition took place. Such flat erosion usually speaks of rapid sheet erosion. This shale deposit is often presented as classic evidence for uniformitarian deposition in a “calm and placid sea,” but could there be another interpretation?

From what I have read it’s true that the surface on which the shale lies is fairly flat, though Morris’ interpretation (hinting at the flood) may well be in error. I don’t know who uses this shale as “classic evidence for uniformitarian deposition” – Morris doesn’t say. Following this he presents his evidence for catastrophe:

The shale consists of innumerable fine layers, or laminations, that can be easily separated. Often between the layers are fossils of both marine creatures such as brachiopods and land plants such as lepidodendrons. Also present are animal escape burrows, formed as rapidly buried sea creatures attempted to burrow out of an underwater grave. The mix of environments seems to indicate that it was not a calm environment.

I find it interesting that Morris attributes burrows to escaping sea creatures rather than normal processes of bioturbation – perhaps they really mean that the sea-bottom was stable enough for animals to live out their lives within it? It seems that creationists really do interpret the evidence in front of them differently, but that’s nothing to be proud of. None of the above, by the way, indicates anything other than a “calm environment.” But there’s more:

The laminations are also problematic. Instead of being uniformly flat, they are graded and tilted up at an angle, and in some places they form cross-beds, requiring a rapid current environment. An overall look at the strata leads to a diagnosis of hummocky cross-stratification, also indicative of rapid water current and continual deposition of particles. The clay particles themselves are uniformly aligned, as revealed by an AMS (anisotropy of magnetic susceptibility) study, a prime indicator of current.

From my reading it is correct that the shale exhibits hummocky cross-stratification, but this isn’t evidence of current so much as storm waves – storms that “did not impart sufficient energy to the seabed for sediment destabilisation,” if you were tempted to jump to the conclusion that that’s just more evidence for the Flood. The tilting, meanwhile, may be the result of deposition on mud banks.

The AMS business does show that there was a current, at least. But it’s interesting to note that while the current in some regions of the shale all goes in one direction, in others the current apparently pointed in radically different directions depending on where you stood. While Morris never explains what macro-scale current direction readings he would expect from the shale if it really was produced by the flood, this doesn’t seem to fit my personal conception. On the other hand it seems perfectly reasonable for the current system of an inland sea – the afore-linked paper goes into detail about how this would work.

Most importantly, the layer is enormous in areal extent. It was first identified in Tennessee (where it received its name), but now is widely recognized from Alabama to Canada on the east coast, to Iowa and Texas, to Oregon on the west coast, and into northern Mexico and even offshore. No modern analogy exists for such a deposit.

The claimed extent is cited to “Weil, S. A. et al. 1979. National Uranium Resource Evaluation: Chattanooga Shale Conference, U.S. Department of Energy.” I can’t find a readable copy of that on the internet, unfortunately. However a Talk.Origins FAQ article debunking a similar claim, that this shale deposit was somehow the result of a volcanic eruption, also cites the same source and borrows from it a figure depicting the extent of the inland Chattanooga sea (which deposited the shale). It can be seen from this that the arms of said sea did indeed extend “from Alabama to Canada on the east coast, to Iowa and Texas, to Oregon on the west coast, and into northern Mexico and even offshore” – however, it did not include even half of the entire area bounded by these points. Despite this the maps showing the extent of the shale itself that I have seen don’t have all of even that area marked as having the shale.

I really don’t know if it’s true that “no modern analogy exists” – I would be interested to know how you would actually investigate that claim. Certainly, there are no modern continental seas such as the Chattanooga which may well prevent such a thing being formed today, but then again perhaps not. That’s not really relevant to the issue, as it doesn’t automatically mean that there must be a supernatural explanation.

So many Bible verses – he must be right! In reality there is nothing here that is inconsistent with normal marine processes (most seas have a current of some description, after all) and nothing suggests that there was a “catastrophic cause.” It may be true that the deposition of shale is difficult to reconcile with the storms and currents (my hunch is that it is not), but whatever problems this may pose for the “uniformitarian” explanation are only multiplied for Morris’ catastrophic Flood. Unless he has some other evidence up his sleeve Morris’ conclusion here is the wrong way around.

4 thoughts on “The Chattanooga Shale”