Does this paragraph make sense to you?

It was once the banner fossil behind the idea that land-walking creatures emerged from fish with overgrown fins. The lobe-finned fish was found in strata deemed 400 million years old—close to the time when land creatures supposedly evolved—making a tidy evolutionary story. But that didn’t last long. Marjorie Courtenay-Latimer became famous for finding the live creature on a small fishing boat in 1938. A new survey of the critically endangered fish’s genes shows that they are not finished divulging surprises.

That’s the opening of Lobe-Finned Fish Supplies Surprises, and it sure doesn’t make sense me. But some of the the individual words do, so perhaps something can be salvaged. 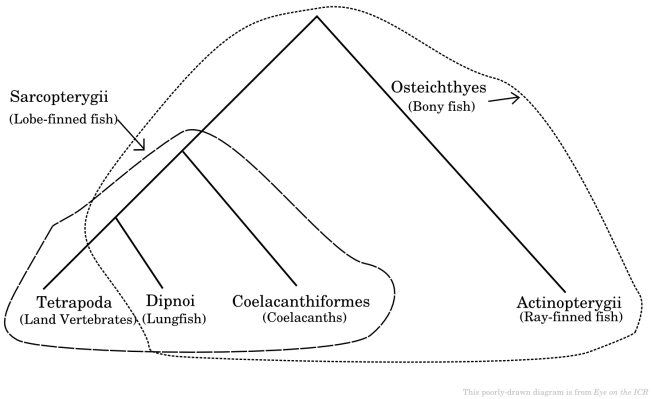 Lobe-finned fish are a subgroup of the bony fish, distinct from the ray-finned fish. This grouping may or may not include land vertebrates such as us, depending on whether you think it’s more important that we’re “still fish” (in the ‘still bears’ sense) or that we quite definitely aren’t fish. I’ve drawn it to include tetrapods, but for bony fish not to include them, largely for the sake of showing the difference – ask me again in a few years and I’ll probably know by then if that’s a mistake. As for the group’s characteristics, Wikipedia tells us:

Early sarcopterygians or crossopterygians are bony fish with fleshy, lobed, paired fins, which are joined to the body by a single bone. The fins of crossopterygians differ from those of all other fish in that each is borne on a fleshy, lobelike, scaly stalk extending from the body. Pectoral and pelvic fins have articulations resembling those of tetrapod limbs. These fins evolved into legs of the first tetrapod land vertebrates, amphibians. They also possess two dorsal fins with separate bases, as opposed to the single dorsal fin of actinopterygians (ray-finned fish). The braincase of sarcoptergygians primitively has a hinge line, but this is lost in tetrapods and lungfish. Many early sarcopterygians have a symmetrical tail. All sarcopterygians possess teeth covered with true enamel.

Next, their evolutionary relevance. This usually concentrates on lungfish, which among other things can breath air (hence the name), as this group is closest to the tetrapods and the conquest of the land by vertebrates tends to be considered important. You can learn a lot about the origins of a group of organisms by studying the similarities and differences between it and closely related creatures. But that doesn’t save this sentence:

The lobe-finned fish was found in strata deemed 400 million years old—close to the time when land creatures supposedly evolved—making a tidy evolutionary story.

And certainly not the next two:

But that didn’t last long. Marjorie Courtenay-Latimer became famous for finding the live creature on a small fishing boat in 1938.

That doesn’t make a lot of sense in context. We were talking about lobed-finned fish as a whole – what Courtenay-Latimer found was a coelacanth.

The coelacanth, as everyone should know, is a grouping of fish that was thought to have died out some time in the Cretaceous, as we have no fossils between then and now. Two species are now known to exist. Latimeria menadoensis (discovered only in 1997) is less well known, living in Indonesian waters, while Latimeria chalumnae is what was found in the boat in 1938 and lives off the east coast of Africa – the latter is listed as ‘critically endangered,’ as Thomas says, and is the subject of the study being ‘discussed’:

A new survey of the critically endangered fish’s genes shows that they are not finished divulging surprises.

The press release Thomas cites is 400 million years old, but still capable of adapting, while the paper (which is open-access) is Population divergence in East African coelacanths in Current Biology. First up though, the idea that the coelacanth (as a “living fossil”) somehow disproves evolution is an oldie, but is entirely without basis. It’s similar to the people trying to teach children that the existence of the Loch Ness Monster disproves evolution also, even though Nessie doesn’t exist and wouldn’t be problematic in that sense even if it did.

Moving along, what’s been done here?

A team led by German researchers from Ruhr-University Bochum published the first genetic population survey of these storied fishes in the journal Current Biology. They analyzed DNA sequences from 71 adult coelacanth fish.

The team analyzed the most variable region of the mitochondrial chromosome, the “d-loop.” After 400 million years, different fish populations should show significant differences, but only 8 of 726 ceolacanth d-loop base pairs showed variation. Such a low number of differences is easily explained if coelacanth are only thousands of years old.

Ok, there are a few problems here. The paper says:

Mitochondrial D-loop sequences from 62 individuals [2,3], including 13 new specimens from Tanzania, were analyzed. They confirmed the very low genetic diversity in Latimeria chalumnae. Only 9 very similar haplotypes were found (Figure 1C) and within the 726 bp alignment only 8 positions were variable (Supplemental information ). Haplotypes differed maximally at five positions (average 2.7 = 0.37%; Figure 1C). Consequently, the mean genetic distance (Kimura two parameter distance) between haplotypes was similarly low: 0.0038 ± 0.002. Seven of the eight exchanges were transitions and six were A to G mutations (Supplemental information ). This low level of haplotype and mutation diversity appears counterintuitive considering the species’ long existence. Either the evolutionary rate in Latimeria chalumnae is extremely slow [4] or haplotypes may have diverged rather recently after the species went through a bottleneck.

(Emphasis added.) The question I want to know the answer to is how they know how old the species is – we’re specifically talking L. chalumnae here – and what age it is. After all, there is apparently a completely empty gap in the fossil record all the way back to two genera in the cretaceous, though the diversity picks up as you go back. The answer certainly isn’t “400 million years,” not least because of all those other genera (there’s dozens of ’em). The two possible explanations given in the paper are perfectly plausible, but Thomas’ is less so.

This is because, for coelacanths to have a low rate of genetic changes/diversity, they really need to have a low level relative to something. So if this matches the ‘creation prediction’ or whatever, then all the other animals that don’t have such a low diversity suddenly become problematic – being also supposedly “only thousands of years old.” You can’t have it both ways, not unless you’re willing to concede a variability that makes them even easier to explain without requiring a young Earth.

The study authors wrote in Current Biology, “Either the evolutionary rate in Latimeria chalumnae [coelacanth] is extremely slow or haplotypes may have diverged rather recently after the species went through a bottleneck.” To have only produced 8 out of 726 base pairs in mitochondrial DNA’s most highly variable region after 400 million supposed years would be a rate so “extremely slow” that it defies credibility.

Yes, I’m fairly certain that nobody is claiming that they’ve had 400 million years to do it, so the point is moot.

On the other hand, recent species divergence fits the genetic data. But it also fits the creation model, wherein coelacanth fish were created only thousands of years ago. Some died and were buried in Noah’s Flood to later become world famous fossils, and a few others survived through the Flood to eventually produce today’s populations.

As if still-living coelacanths were not enough of a blow to evolutionary dogma, its genetics now also confirm biblical creation.

Yeah, no. Neither of those last two statements are true, or any of them after the first sentence quoted. Probably not a record, but I should keep count.