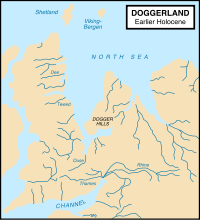 At the beginning of this month a wealth of information was announced about the fauna, flora, geography, and habitation of the landmass in the North Sea known as Doggerland, which sank beneath the waves between 18000 and 5500 BC due to post-glaciation rising sea levels. As you might expect from a description like that, the news reports have been full of references to a “British Atlantis.” Several weeks later, Mr Thomas’ amusing article – Making Sense of Britain’s Atlantis – does the same.

What’s to be made sense of? According to Naturalis Historia, quite a lot if you’re a young Earth creationist. Most importantly, note that during the height of the last glaciation the land – though at its greatest extent – would have been uninhabitable as it would have been as barren as any other part of Northern Europe. Today also it is uninhabitable, but for the more immediately obvious reason that it’s underwater. So it could only be settled (as we now know beyond a shadow of doubt that it was) in the between-times, during which it would have been in the process of drowning. There’s thus not a great deal of time for that to happen in (~10000 years is still plenty, just much shorter than the full ice age etc), but naturally the young Earth creationists find themselves compressing all this time into perhaps a hundred years, tops. N.H. points out that this and other cases of underwater habitation in such a short period just after the Flood/Babel present a bit of a problem.

Thomas ignores this completely. Let’s see what he has to say for himself:

ICR News previously reported evidence of Ice Age habitations in the English Channel. Fishermen and, more recently, researchers have dredged human artifacts and Ice Age animal bones such as mammoth teeth from the depths of the North Sea, which separates England from the European mainland. Now, investigators have begun mapping stone and ancient landform structures on and below the sea floor and are more seriously trying to piece together the clues.

That article mentioned in the first sentence was from March 2011, and called Has the Lost City of Atlantis Been Found? It’s about Richard Freund’s bullshit Spanish Atlantis and accompanying documentary, and is irrelevant to both the North Sea and the Channel. The ICR gives far more credence to the Atlantis fairytale than they ought, which on one occasion lead Christine Dao to argue that (real) geologists shouldn’t mind young Earth creationists as they don’t seem to mind the people searching for said city.

Dr. Richard Bates, a geophysicist at St. Andrews University in Scotland, called the sunken civilization “Doggerland” after the United Kingdom’s east coast Dogger Banks. He said in a university press release that “we have found many artefacts and submerged features that are very difficult to explain by natural causes, such as mounds surrounded by ditches and fossilised tree stumps on the seafloor.”

I get the impression that he got the civilization part from his Atlantis infatuation, as it’s the landmass that’s called Doggerland, and nobody is suggesting a recognisable civ’. It’s much too early, for one. Stand by for that line to change, in other words. Skipping ahead:

So far, none have claimed a connection between Doggerland and Atlantis, which some researchers believe was once an Ice Age city, now submerged off the west coast of Spain.

So all those headlines, including your own..? As for these “researchers,” Atlantis hunters tend to have about as much credibility as creationists, the city being demonstrably made up (and as originally told, nothing like the present mythology).

You can see that even Thomas will offhandedly concede his short time frame. But even though habitation is the major part of the meat of the actual news story, Brian instead concentrates on his YEC-catastrophist explanation for the geography of the region:

A giant ice dam that once spanned roughly from Dover to Calais and retained a lake to its northeast catastrophically failed, resulting in the local flood that carved the English Channel.

His citation for this is a Nature letter from 2007 called Catastrophic flooding origin of shelf valley systems in the English Channel. Unfortunately for Thomas, however, an accompanying article informs us that while they are indeed talking about cutting off Britian via megaflood, there were in fact two such floods involved and both of them were several glacial cycles too early for his narrative. They’re also crediting the dam to rock and not ice, but that’s a technicality. I’ll have to research this further, but I so far haven’t seen anything to suggest that this is not the current understanding in important aspects.

This was not a singular kind of event. Recently, meteorologist Michael Oard listed seven local megafloods occurring in Siberia, Canada, the United States, and Alaska. Post-Flood Ice Age cities that are offshore today were submerged by the cumulative waters from many local ice-melt “megafloods” similar to the one that carved the English Channel. Doggerland data makes sense in light of the post-Flood Ice Age.

What’s with these ‘cities’? They would barely have had time to get there, let alone dig a ditch around the farm and call it a metropolis. Doggerland, at least an inhabited Doggerland, does not “make sense in light of the post-Flood Ice Age.” Not without a serious revision of the chronology the ICR posits.

I’ll get back to the three Tomkins DpSU I have missed in total this month over the weekend, along with (I suspect) a new video, and if I have time I’ll polish off the July Acts & Facts into the bargain. I’d have done them in more chronological order but an Atlantis story was too good to pass up, not to mention being better for the getting-back-into-it process.