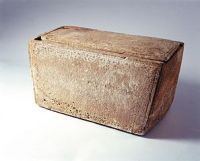 Thomas writes: ‘James…Brother of Jesus’ Ossuary Is Rock Solid. What’s the cause of this horrible punnery?

Thomas’ intro is accurate until his final sentence:

In 2002, the Biblical Archaeological Society and the Discovery Channel announced in Washington, D.C. that an ancient inscription on a 2,000-year-old ossuary with the inscribed Aramaic words “James, son of Joseph, brother of Jesus” was genuine. However, controversy and a lawsuit over the veracity of the inscription followed. That’s all over now, and the verdicts are in.