Somewhat more specifically, today Mr Thomas is claiming that the Flood Explains ‘Worldwide Pattern’ in Ancient Rock. Precisely what this pattern is is not well explained by Mr Thomas, but you can rest assured that the Flood explains it – it’s in the title, after all. What more do you need? 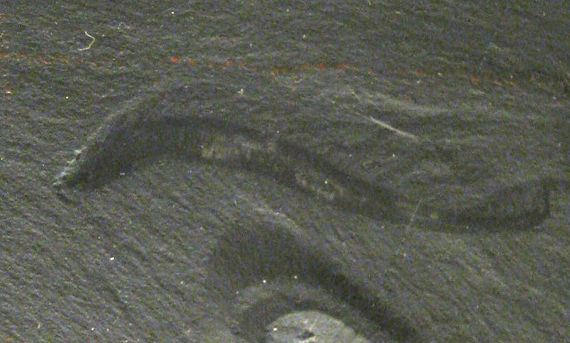 The paper that this is based on is another open access article from PNAS (has their login expired?), this time called Mechanism for Burgess Shale-type preservation. A press release is also linked to by Brian, though you’ll note that he has his first and second reference swapped relative to how he cites them in the article. A screenshot of the article as it is at time of writing can be found here.

Thomas’ article is a confusing mess, so I’ll go through it paragraph by paragraph:

Marine biologists have scoured sea floor sediments for decades, finding living creatures in the mud but never fossils in the process of forming. That’s because when a sea creature dies, its carcass is totally recycled within weeks. So, if a creature’s soft parts are going to fossilize, it has to happen extremely fast.

Brian rarely misses an opportunity to push the idea of catastrophic and fast events such as fossilisation. To begin with, it merely shows that something out of the ordinary must happen – quick burial, say, or other odd conditions. And I’m not so sure about his claim that “marine biologists have scoured sea floor sediments for decades” – we know so little about the deep.

Certain sedimentary rocks, like those of the Burgess Shale in Canada, contain large amounts of fossilized sea creatures that preserve some soft body parts, such as eyes and intestines. Their remains now consist of the same carbon atoms of which their bodies were comprised, but baked and compressed into thin films. Paleontologists have attempted to find an explanation for this remarkable preservation.

You may need to brush up on your soft tissue preservation – in this case we do have mineralisation, but the soft tissues have also been mineralised. Some of the carbon, in the form of inert Kerogen, may remain in the fossil all these millions of years. Burgess Shale type preservation is the kind of preservation we see in both the shale after which it is named and around 40 other known sites from the Cambrian and a few others from earlier. According to the previously linked press release:

The process for this extraordinary preservation remained a mystery since the initial discovery of the Burgess Shale in 1909 until now.

In pursuit of answers to this question, Robert Gaines of California’s Pomona College and his team recently looked for similarities in what are called “Burgess Shale-type” fossils from places like the Chengjiang Shale in China’s Yunnan Province. The researchers analyzed ratios of carbon, oxygen, and sulfur isotopes within the millimeter-thin layers of very fine-grained mudstone from the region. Their results appear in the Proceedings of the National Academy of Sciences.

Somewhat more correct would be to say “Robert Gaines, Emma Hammarlund, and their team”, as they apparently were equal partners in this research, but that’s a technicality. Nevertheless, this paragraph seems to be correct. Moving along:

Gaines said in a University of Southern Denmark press release via EurekAlert!, “My initial hypothesis was validated by a consistent and worldwide pattern.” According to the technical paper, that pattern first included “rapid entombment of soft-bodied organisms in sediments” and then hardening of the sediment very soon afterward under a layer of calcium carbonate “cement.” This was supposedly caused in part by “enhanced alkalinity of Cambrian oceans.” Also, the assumed “global ocean” of the time had low sulfate levels, leaving sulfur-eating bacteria too little nourishment to completely degrade the fossils.

In addition, the study authors wrote that preserving Burgess Shale-type fossils “was greatly enhanced by the absence of bioturbation,” which refers to the way in which creatures like worms and clams constantly churn sea floor and lake bed sediments.

I’m not actually sure what the hypothesis was. The reference for what bioturbation is is a John Morris Acts & Facts article from 2009 – I prefer the wikipedia page myself. As for the pattern, according to the press release:

[T]he team’s unique collection of samples led to the recognition that unique aspects of early Paleozoic seawater chemistry that were key to the unusual Burgess-type soft-bodied fossil preservation—the low sulfate concentration, low-oxygen bottom water conditions, and the mineral carpet that aided in choking the hungry microbes—was a striking global pattern.

So, now Brian’s going to tell us how the Flood ‘explains’ this?

But did all that really happen? Probably not, since most of those events invoke unexplained phenomena, such as strange ancient sea chemistry and a puzzling absence of bioturbation. Plus, if sealing buried creatures under limestone explains Burgess Shale-type fossils, then similarly preserved fossils should be found beneath the continent-covering limestones all over the globe, and not just in isolated pockets.

No he dismisses it, and on the basis that the conditions – which are known to have been the case – are not themselves explained. And as for his “similarly preserved fossils should be found beneath the continent-covering limestones all over the globe”, for one these Burgress shale-like things are from all over the world, and also the ‘continent-covering limestones’ are (I suspect) of the wrong kind of thing to what we are looking for and are not necessarily of the right age. The Cliffs of Dover, for example, are much too young for this period. There are many reasons why such events would be fairly rare.

But it does appear that the conditions, whatever they were, that formed these exquisite fossils existed at the same time. The study authors cited evidence of “rapid entombment” by “bottom-flowing density currents.” And whereas standard geology has no explanation for such widespread catastrophic undersea density flows, creation scientists can cite the Genesis Flood in describing the unprecedented scale of violent geologic activity implied by these and other fossils.

I see no reason why these “bottom-flowing density currents” must be “catastrophic” of indicative of “violent geologic activity”. And certainly not why they must be unexplained – strange things happen under the deep.

You’ll note also that these currents have nothing to do with the ‘pattern’, yet they are what is being ‘explained’ by the flood. The title of Brian’s article, therefore, is rather incorrect.

16 thoughts on “The Flood Explains All”