Planetary magnetic fields – particularly that of mercury – are a recurring topic for DpSUs. Thursday’s article, when it eventually appeared, was called What Magnetized the Moon?

In mid November in Nature there were two papers discussing possible causes of the Moon’s long-decayed magnetic field, along with another article about both papers. Curiously, Brian Thomas only discusses one of these papers. 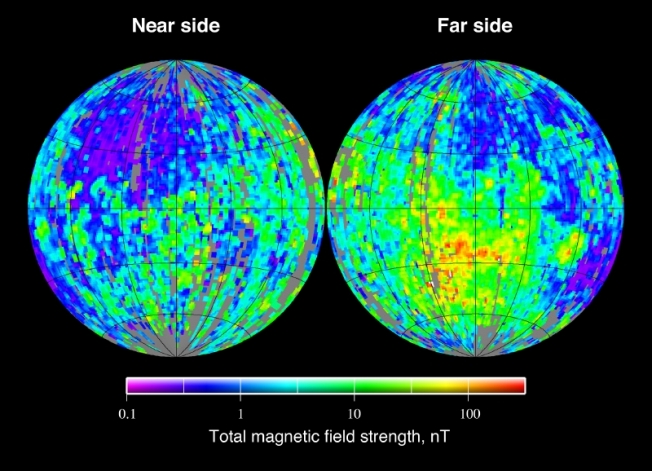 The 1969 moon landing was one of the crowning achievements of mankind. And magnetic moon rocks were some of its most mysterious discoveries, showing that they hardened in the presence of a magnetic field.

He never comes back to these rocks. I think the idea is that they showed evidence of being formed in a pretty strong magnetic field, much stronger than the present. But I’m not entirely sure if they’re unexplainable, or anything.

But if the moon is billions of years old, it should not have had a magnetic field. It is too small to generate its own field. Ever since the moon landing, theorists have been trying to figure out how the moon could have been magnetized.

Where does the “if the moon is billions of years old” come in to it? It shouldn’t have one now, and it doesn’t – the weak extant field shown above is a magnetised crustal rocks thing, not a planetary dipole.

From my reading they didn’t “suggest” it – it’s an observed fact. This generates power, which decreases over time due to the Moon drifting away from the Earth to a point where it is unable to drive a dynamo and produce a magnetic field.

The researchers’ model suggests that at first, the moon’s mantle and core would both have been molten and not magnetic. Much later, the core and hardening mantle mixed, making the moon magnetic. The Nature authors wrote that this “mechanically driven dynamo could persist for at least ~1.6Gyr [billion years].”1 Millions of years later, the moon had supposedly drifted far enough from the earth that the greater distance lessened the earth’s gravitational pull and “switched off” the magnetic generator.

Lead author Christina Dwyer of the University of California, Santa Cruz, told Space.com, “Based on what we know about stirring, and everything we know about fluid motion, we can find no reason that this would not work.”

The Space.com article is here.

But this is unrealistically optimistic. The authors’ supplemental material described four of the unique and required conditions for their model of the early moon. First, the fluid core must have been stirred with enough energy. According to the authors, the shape of the core and mantle today, along with other measurements, shows this is possible.

Supplementary material is here. Interestingly, they claim that the present amount of energy is almost, almost sufficient for a dynamo to work.

Second, “the core may have undergone a transition from co-precession to differential rotation as the Moon evolved outwards from the Earth.” In other words, though the core and mantle would have rotated in lock-step initially when hot, they must somehow have been thrown out of sync when sufficiently cooled.

Again, this seems to be an already-known thing, and a bit of a quote-mine on Mr Thomas’ part to imply otherwise.

Third, the model requires that the moon’s partially melted interior was turbulently, not smoothly, stirred.

And they can show that this was the case.

Finally, a magnetic field could only be generated by this model with a specific ratio of fluid thickness to heat distribution.

My reading of the supplementary material has the fourth condition to be “the magnetic Prandtl number, Pm, (which compares the rates of momentum and magnetic diffusion) must exceed a critical value.” They say that Pm “greatly exceeds” this value, and so conclude that “dynamo activity is possible.”

But even with these conditions met, the model still falls short. No physical experiment has demonstrated how fluid motion can generate a magnetic field.

His cite for this incorrect claim is an article on the Creation Ministries International website by D. Russell Humphreys, the Creationists’ main man when it comes to magnetic fields. This article – on the same subject as Mr Thomas’ – does not make the claim above nearly as strongly as B.T. does, and even includes a cite to a five year old article about an experiment which, if nothing else, demonstrates “how fluid motion can generate a magnetic field.”

And more hurdles remain. For example, the researchers had to first assume that the moon was once very close to earth.

You may be aware that the idea that if we take the current rate of lunar recession and multiply it back in time you reach the surface of the Earth long before you get back to billion of years is an old creationist PRATT, or Point Refuted A Thousand Times. Here’s an old article on the ICR website that uses it, along with a number of other arguments they should really find embarrassing (including the lunar dust one, which is on AiG’s list of arguments creationists should avoid). While this point may be ‘refuted,’ on the other hand the Moon was closer in the past. It’s no assumption.

Also, the system depends on the moon’s “precession,” or wobble, to have lasted billions of years.

He’s scraping the ol’ barrel bottom here. Tell me – why shouldn’t it?

And “the Moon’s core is much smaller than the Earth’s core, and the Moon rotates much slower than the Earth. If a dynamo is unlikely for the Earth, then how much more unlikely would one be for the Moon?”

The quote is from the CMI article. Not only is a dynamo not unlikely for the earth, the point is irrelevant as the driving mechanism is different. That’s the point of this paper.

Each additional constraint reduces the model’s realism. And even after waiving these problems, there remains no scientific reason why molten fluids would generate a magnetic field.

That is what we call denialism. See above.

However, a creation-based explanation published in 1984 for the moon’s magnetic field provides a plausible reason for the magnetism that was present when moon rocks formed. God “could have created many of the Earth’s original atomic nuclei with their spins pointing in a particular direction,” and likewise for the moon and other planets. The added effect of all these aligned atomic magnets would have generated a magnetic field that decayed soon after as the moon’s atoms randomized.

Humphrey’s model is… weird. He has God create all the bodies in the universe as water, with spins aligned, and then ‘transformed’ them. We last saw the model in Mercury III and to summarise it, it predicts nothing and explains little.

This model readily explains why the moon’s magnetic field existed when moon rocks were formed and why it has since diminished. The fact that the moon once had a magnetic field follows from this creation model and does not suffer from any of the issues that the secular models must overcome.

And that’s that. The other Nature paper, which Brian ignores and Humphreys almost ignores is about impacts temporarily creating a field, which is not contradictory and may even be complimentary to the discussed paper. To summarise the B.T. article, he can’t make a solid objection to the proposed model of the difference between the rotation of the core and the mantel producing a dynamo. Humphreys can’t either, as it happens.

6 thoughts on “The Magnetic Field… of the Moon”