Somebody has found some very nice early Cambrian compound eyes. “Very nice” in that the eyes seem to be quite good – “[t]hey have over 3000 lenses, making them more powerful than anything from that era, and probably belonged to an active predator that was capable of seeing in dim light,” the article says. The eyes were apparently similar to that of a shrimp, although the fossils are not attached to any creature that would tell us what it was.

Naturally, Brian Thomas – in Cambrian Shrimp Eyes Are ‘Surprisingly Advanced’ – is trying to claim that the early Cambrian is too soon for compound eyes, and, as usual, makes a few mistakes along the way. The most obvious one is this:

The Cambrian Explosion ≠ the origin of life. Just thought I’d bring that up… 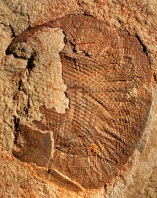 In a compound eye, each individual eye contributes a single pixel to the resulting image. Other known Cambrian eyes have around 100 such ‘pixels’, but this new fossil, pictured, has more like 3,000. Mr Thomas tries to draw parallels between this fossil and the eyes of Dragonflies, but modern dragonflies have in the order of 28,000 pixel eyes. Modern shrimp also have similar numbers, contrasting with BT’s closing claim that “God made shrimp with fully formed eyes from the beginning”.

As you should have gathered by now, the question that Brian Thomas is raising is whether this eye could have evolved in 30 million years. In reality, as life did not begin 542 million years ago, the eye could have potentially have had much longer to evolve. In any case, the human eye is estimated to have (potentially) needed only 400,000 years (yes, I put in the right number of zeros) to evolve (it obviously would’ve taken longer due to the other things that would need to evolve at the same time, the point is that the eye itself presents no real lower limit to its evolution). The compound eye is a much simpler eye, duplicated quite a lot of times. This duplication, by the way, is not particularly hard for evolution to do.

I find this paragraph quite amusing:

Reams of genetic information are required to construct compound eyes like those found in these fossils, and each bit of genetic information is supposed to have been generated by a lucky mutation. The problem is that according to the calculations performed by evolutionary researchers, 216 million years are needed to acquire just two coordinated mutations in sequence, at least in humans.5 Compound eyes needed thousands of coordinated mutations to have occurred in only 30 million years. In essence, evolutionists have refuted their own story.

What is citation 5? It’s this paper: Waiting for Two Mutations: With Applications to Regulatory Sequence Evolution and the Limits of Darwinian Evolution. This may sound like a pro-creationist paper that slipped through, but in reality the “Limits” part is summed up in the abstract as “[we] expose flaws in some of Michael Behe’s arguments concerning mathematical limits to Darwinian evolution”. Michael Behe, if you didn’t know, is a Cdesign proponentsists from the Discovery Institute. A nice blog post on the paper can be found here. I can only say that the 216 million years number is not relevant here – for starters, that requires that we are “waiting” for two specific mutations.

Needless to say, this quote is factually incorrect:

The assertion that these eyes are the result of “evolutionary innovation” is clearly false.

One thought on “Cambrian Compund Eyes – The Creationist POV”